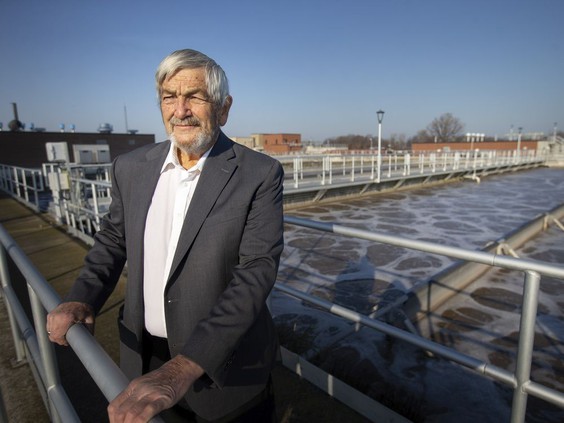 Lakeshore officials broke ground Tuesday on an expanded wastewater treatment facility to help the growing municipality increase capacity and restart development after a pause on new builds started in 2020.

The expanded facility will add 70 per cent to the municipality’s wastewater capacity and is expected to be complete in summer 2023.

“This is a remarkable investment, not just in the amount of water we can treat, but it’s an investment in the needs of our community,” Bain said. “It’s an investment made on behalf of Lakeshore’s future citizens, especially our business owners and all those people who choose Lakeshore as their home community.”

“While we’re here earlier than any of us though we would be, we’re thrilled to break ground on this project.”

The Municipality of Lakeshore has had a development pause in effect since last year, when the wastewater plant reached capacity. The facility reached capacity earlier than planned thanks to higher than expected population growth and changing water habits during the COVID-19 pandemic, officials said.

Truper McBride, Lakeshore’s CAO, said the town   is building the expanded wastewater facility at least five years ahead of schedule.

“Obviously no municipality wants to be in a situation where you’re having to jump ahead a major sanitary expansion faster than you were planning   on doing it,” McBride said. “But I think if you were to look at the numbers for Lakeshore for this year, even with the pause … we’re blowing away the projections we thought we had and we’re still growing quickly.”

The municipality began the process expand the Denis St. Pierre facility in 2018, McBride said, when staff noticed increased flows as a result of higher than expected growth. An environmental assessment started in 2019, followed by design work and tendering 2020 and 2021. The plant was originally built in 1977 and treats wastewater from the northwest portion of Lakeshore.

“We had fears it could be two, three years before we would get this built,” Bain said. “We’re pleased it’s moving along so fast.”

Through the town’s development freeze, developers with approved projects were allowed to continue work, and those with completed applications continued on a case-by-case basis depending on needed capacity. All new development was deferred until the wastewater expansion was tendered.

New development applications are now accepted with connections set for when the plant is operational, officials said in a statement.

“On a lot of these types of projects the developers can come in, do all the paperwork and engineering that has to be done,” Bain said. “All of that can get rolling.”

The $55-million price tag for the expanded wastewater plant will funded through development charges, McBride said.

“I think we’re striking the right balance,” he said. “Obviously it’s not the ideal situation we’re in but I think that you can see we’re doing everything we can to work with (developers) and keep Lakeshore growing.”

“It fits with the policy we have here of ‘growth pays for growth’ so that this doesn’t come on the back of the existing ratepayers.”